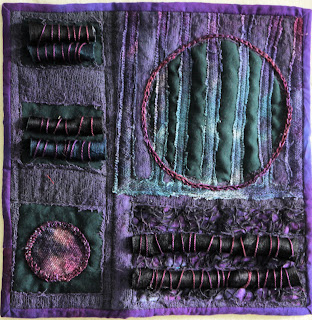 The first of my journal quilts this year is inspired by memories of a very difficult period of my life: my husband died eleven years ago and during the first two years after his death I experienced financial hardship, problems with the house which needed repairs I couldn't afford and depression.  I also neglected friendships and became rather hermit-like.  If the piece above, which I have called Dark, looks grim, it is because it is meant to.  I've also deliberately used coarse fabrics - various scrims, including jute scrim, raw edges and silk carrier rods - the black-dyed rods it occurs to me are like huge blocks of something barricading me in from the outside world, which is exactly what happened...
The second phase is where I was beginning to cope - living very abstemiously, paying off debts, decluttering the house and applying for a renovation grant.  However, another setback occurred when I wa diagnosed with endometrial cancer.  This left me feeling raw and vulnerable, hence the title of the second piece, called Raw: 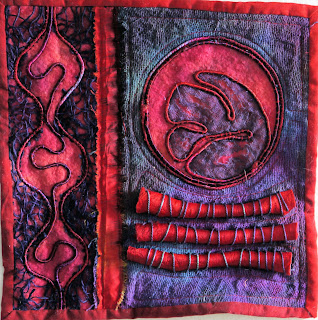 The third piece is after I had been operated on and had undergone radiotherapy and the work on the house had begun.  I was also financially more stable by this time and the title, Mending, describes the time when I was beginning to find things enjoyable again, and becoming less isolated, repairing old friendships and developing new ones.  Hence the brighter colours.  I've also used materials and techniques which suggest healing - the dyed mesh is fabric used for wound dressings; I've used darning and knots. 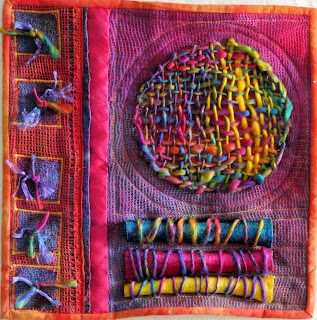 The fourth journal quilt is called Light, and describes more or less where I am now, having shed some of the previous burdens: treatment for cancer was successful.  The house is still a work in progress, but only in terms of bits needing redecorating - all the serious stuff has been done.  And although I apparently earn well below the national average I can live comfortably within my income.  I am enjoying life and feel comfortable in my own skin for the first time in a long while. 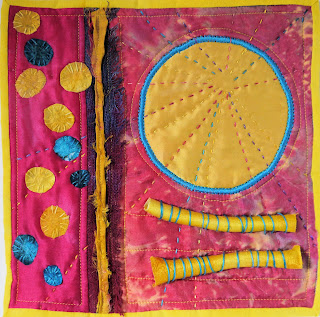 The final project for this month has been a small quilt I made for a display at the Quilt Museum in York of work from our region of the Quilters Guild.  The challenge was to make a long narrow quilt in tints and shades of one colour only.  And somehow I found myself visualising ferns:  here's the quilt - it will be on display in the Aldwark Gallery for the months of July and August:

Your JQs show a wonderful progression from dark difficult times through to the light and hope for the future and they work so well together. I for one am very glad that you have come through this journey and I am delighted to be one of your 'new' friends :-) See you soon and I will be going up to York to see the new exhibition.

Beautiful! I love the color in all of them. I especially like "Mending" for the piece itself and the message.

I love your quilts and they are especially moving when you've told the story behind them, good luck with the exhibition hope to see it.ditib

Thanks everyone. Still not sure about the last one but my favourite is Mending - really enjoyed making it

Sandra, your journal pieces are very moving and I think tell your story very well. Thanks for sharing how they helped you work through difficult times to get to a happy place.
Martha Ginn

I love them all Sandra, and it's brilliant that you have been able to express yourself and your feelings in this way, even though it was a very difficult time for you. Your Fern quilt is exquisite, I'm sure it will be very much admired in the exhibition in York.

Thanks for sharing.It sounds like the process of making these quilts has been cathartic and knowing a bit more about the thoughts behind them adds so much.
Look forward to seeing what you produce next!
Good to see you blogging again too!

Lovely to hear the story behind these quilts. the fac that you are able to tell the story says how far you have come.

As for mending being your faourite - this rich palette of colours seems to be much more 'you'than the final piece.

It is true that beautiful things can emerge from even the darkest times. Congratulations on making the journey and feeling able to share it.

Thank you for sharing the story behind your JC's. It will be an inspiration to others who are going through a bad time in their life.

Beautiful work. The color and texture are so pleasing.

Very inspiring story which is represented by your creative work. Thanks for sharing.

I too found the story very moving and you have expressed your feelings so well through your quilts. Look forward to seeing more of your work.

Sandra, your journal quilts give a moving visual interpretation of that period in your life and reflect a similar period in my own.

Your work reminds me of a book called "Emotional Geology" written by Linda Gillard which I would urge to read if you haven't already done so. The author uses quilts in the book to reflect emotion.

I had a lovely time at Textile Without Limit on Sunday and look forward to seeing everyone again soon.

love your work, found you via Pinterest. Beautiful colours and images and my condolences to you as well ♥

I love your story, and all the pieces you designed to tell it.
Josie

O my! These are truly wonderful and emotionally packed works of art! I'm so happy that your life's journey has taken a turn for the better. Hang in there! Blessings will abound.

These are absolutely gorgeous and I love hearing your story. Thank you so much.