I ain't dead yet

Title with apologies to Woody Guthrie.

Very much alive and very busy, but decided to resuscitate the blog, at least until I have a website up and running (I will get to grips with it one day, I promise)

Busy making quilts for exhibitions.  The Cwilt Cymru quilts in the last post (about 19 months ago) have been to Redditch (Forge Mill Needle Museum), Llanidloes (Minerva gallery), and Rhyl Art Gallery, and will also be shown at the Pierhead Gallery in Cardiff (yes we're impressed too!) in November, after which they will tour with Grosvenor Exhibitions.  Work for the next exhibition is currently under way - watch this space.

In September, the Etcetera group, of which I am a member, has its first exhibition at the Platform Gallery in Clitheroe - 14th to 26th September.  If things work out I will have two quilts plus some small pieces on exhibition, space permitting.  The them is transitions, and the pieces I am exhibiting focus on transitions in my life.  This includes the quilt already shown as part of the last Contemporary Quilt Dislocation exhibition:

This quilts was made after coming to terms with my husband's alcoholism, which caused his death.  After dealing with the issues described in my last post I decided that I didn't want to struggle with this on my own, and luckily found an excellent therapist who helped me deal with it.  This included writing letters to my husband's demons, which I did in huge letters on the walls of a room due for redecoration, and wallpaper which I then proceeded to strip off.  It occurred to me that the words, disguied by being written in different directions, would make interesting fabric.  Painted, handwritten and screen-printed fabrics formed the basis of the quilt, which was then cut back to allow the red silk shape through - just as the process of writing the letters had allowed me to see him again and to grieve for him which I had not done properly before.  The quilt, Letters to the Demons will be accompanied by three mixed media pieces, combining painted canvas, fabric and stitch,  Anger, Recrimination and Resolution.  The last was finished first, possibly because it describes where I am now: 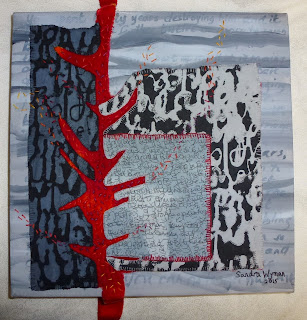 The other two pieces - more painful to produce because I needed to go back there to do it - will be completed shortly.
I did promise to make cheerful quilts this year - and at last this has happened.  The second quilt, in the process of being made, is called Moving On, and is about the realisation that I now have to leave the past behind and focus on my life now and in the future.  It relates to a recent walk in Northumberland along the coast between Craster and Beadnell.  In the earlier part of the walk I recollected the past, and felt acutely the lack of someone to share the walk with but by the time I reached Football Hole, I realised that my husband's alcoholism had, by our last visit to the area, made that sharing impossible, and that there was a sense that I was clinging to an illusion: anything that was to happen in the future would be a different kind of life.  Maybe in some ways a hard-won realisation, but one which enabled me to finish the walk in a much happier frame of mind, in the company of numerous black-headed gulls, terns and only a few - very civilised - people.  Even getting wet up to the knees crossing Long Nanny (the stream that runs into the sea) was fun - at least until I realised that walking in wet socks and boots might mean blisters, and I really should have taken off my boots and socks - but after deciding to get a bus rather than walk the last few miles to Seahouses I was able to encounter two brown hares (or maybe the same one getting around a bit) in Beadnell village...
The resulting quilt is well on the way to completion.  Reference to Beadnell beach and walking across Long Nanny - but with conmplete disregard for geographical accuracy (artistic licence here): 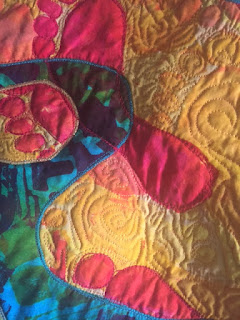 This is only a detail, not the whole quilt, which is currently being quilted, but it does give some idea of the joyfulness of it, the bright colours, the strange sgapes and so on,  The two fabrics are dye-printed, the blueish one from my husband's shoes (it turned out to be a good ides to keep them after all) and the red and yellow one a version of my own footprints (I tried printing from my own feet but it just looked blobby and I ended up with yellow feet for a few days).  It's even brighter than the picture suggests and I hope people will smile as much as I do when they see it.  It has been and is being so much fun to make and is possibly the most joyful thing I have ever done.  And judging by the smiles on the faces of Ryedale Embroiderers Guild members, who I showed it to when I gave them a talk on Saturday,  it may convey that sense of enjoyment to other people.  I hope so!

good to hear that you are beginning to see the 'Blue Sky'. All the best for the exhibition and for the future.

I've only just come across this. My mother was an alcoholic, and abusive with it. I've made a fair amount of work 'about' the experience of growing up with her, and found it really useful. I've also made quite a lot of work 'about' living with chronic depression. Your work looks strong and clear, just like yourself x.